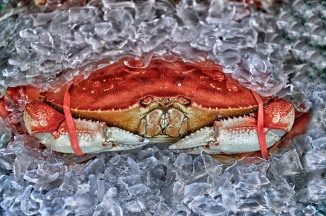 We visited the seafood market rather than the florists. There I spied this crab.

By way of explanation:

We have been visiting the Eastern Shore for well over a decade. We make the trek for a variety of reasons including; rest, relaxation, food, quiet, etc. There was also my quest to return home with a photograph of a heron. I know there are heron on the Shore. I have photographer and non-photographer friends who have prints to prove the existence of heron in the Chesapeake region while I remained “shutout” as it were.

Last Sunday afternoon I lay down for a nap. When I awoke my partner greeted me with an excited grin and showed me the results of her photographic efforts while I was asleep. There on the screen of our point and shoot camera was the unmistakable image of a heron. She told me that the bird had arrived not long after I went to sleep and she hadn’t known whether or not to wake me. I assured her that, while I regretted not seeing the bird, at least someone in our household had finally captured a heron on virtual film. I then sat on the porch and stared forlornly at the platform where the heron had perched. After 30 minutes or so I was startled by the shadow of a bird gliding over the water. Said bird landed on the perch and assumed the posture you see above. I took multiple pictures from a variety of vantage points. The bird never moved and in fact was still perched there when we left for dinner.

Perhaps the drought has ended and we can capture an egret next trip. Photographers are just never satisfied……….. 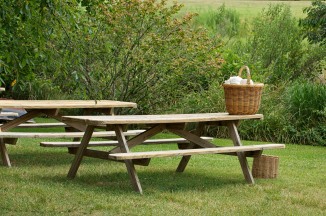 I came across this scene while walking in the gardens. It’s one of 2 images I have that give some idea of the setting we enjoyed in St. Michaels. In case you haven’t noticed, we really like it there.